Click on any photo to see a larger version...

This model is the Creaks AC141 Port of London Authority Police Ambulance (1912) in cream, Port of London Authority Police livery. It comes packed in its original cream window box. This item is based on the Yesteryear Y29 Walker Van and comes with a Limited Edition Certificate of Authenticity identifying the model as number 716 of 1000 produced. The model is also marked with this number on the rear, just below the tail gate.

The model has no opening parts. The vehicle body and roof are cream, the chassis and battery boxes are black, the seats are tan plastic, and the steering wheel is black. There is no glazing.

At the front the model carries a red cross at the centre top and a cream on black background numberplate [LE 7402] at the centre bottom with silver headlights and a silver panel to the bottom right of the model. The sides have a decal with the PoLA crest at the front, just behind the cab side window; two printed areas that represent the rear body windows; and a red cross to the rear of the body side. The rear doors are cast into the body and carry a red cross on each door, above which is the word "POLICE". Below the tail gate is the model's limited edition number of "716". Either side of the tailgate are two red rear lights and there is a black and cream numberplate [LE 7402] flanked by two more red lights mounted on the chassis.

The baseplate is black plastic and carries the "Matchbox" logo and model details — "1919 Walker" to the top behind the front axle, "Y29 © 1985" to the bottom behind the front axle, "Matchbox Intl. Ltd, Models of Yesteryear, Made in England" on three lines forward of the rear axle. It is held in place by a front body locating lug and rear machined rivet.

All wheels are one piece, plastic units with a 12 spoke pattern cast on them. It appears as if the wheels have been painted black as have the axles. 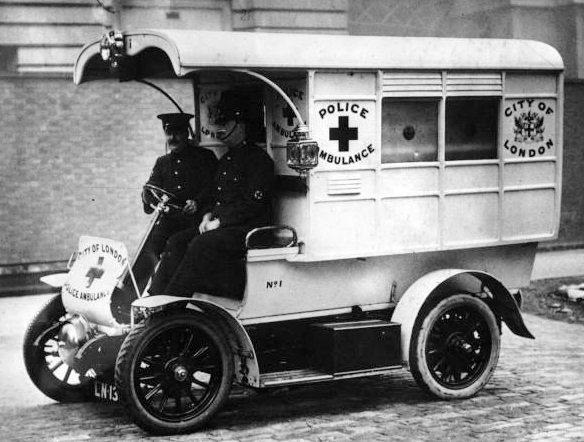 Other Comments/Identifying Features: The model has the Certificate of Authenticity that outlines the history of the PoLA Police and states "This model represents an electrically propelled ambulance in use by the Port of London Authority Police circa 1912 and bears the correct registration number from that time".

The model bears some resemblance to the ambulances used by the London City Police from 1907 to 1927 and I assume, from the model's styling, the Port of London Authority Police used a similar style, if not the same style, of electric ambulance. (In May 1907 the City of London Police Ambulance Service was established and, instead of horses, the service purchased an electrically driven motor ambulance from the Electromobile Company in Mayfair. The body was built to a St. John's Ambulance Association design and was mahogany panelling on an ash frame.)